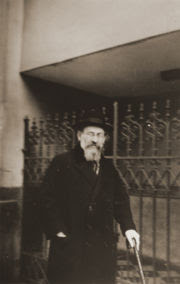 I'm a day late with this post, but I only found this worthwhile link today.
Posted by G6 at 4:05 PM

Thanks for that link. I'm glued to his biography.

I presume you're referring to the wonderful Rav Breuer - His Life and His Legacy. It's an absolutely fascinating volume (although I do wish the authors included more references and source material).

I still pinch myself that I have the zechut to learn torah in the room where he did.

this is reprinted from last year! grr...i want new stuff!

There's certainly a lot that went unexplored, but for a popular volume, I found it excellent.

As perhaps the youngest person alive who can claim to be a direct product of all three Washington Heights Orthodox yeshivot [or should I say "yeshivas" or "yeshivaus..."] (YRMS, YRSRH, YU), I wish that there was a little bit more about the relationship/ conflict between the institutions and their leaders, as well as a bit more about some of the supporting characters in the founding of the Breuer's community (fr'instance, how did R' Elchanan Wasserman's son wind up as a TIDE rebbe when his father was so vehemently opposed to the TIDE approach?)

Actually, I just meant the article. This may be a year old, but I've never read about him, just heard bits and pieces.

They shoulld have merged with YU years ago. YU is wildly succcesful and KAJ is barely holding on .

Anonymous -
This is not the forum to get into complicated philosophical comparisons, but I will say that there is a difference between the two hashkofos.
Success at the expense of your beliefs isn't much of a success in the end.....

When you say that there is a difference between the two shittos, based on what definition of Torah Umadah are you saying that?

But if someone asks, What does Torah Umadah mean, Rabbi Revel (YU's founder) would give one answer, Rabbi Belkin (YU's second president) another, Rabbi Lamm a third, and Rav Soloveitchik a fourth. Every year in YU's student newspaper, people debate what Torah Umadah means.

I fail to see why one must make divisions where there aren't necessarily any.

Do I know you? I've been making similar points about TuM vs. TIDE for quite some time, although I add one more caveat that, to my mind, renders the debate even more meaningless: TIDE is a communal life philosophy, TuM (however you define it) an academic one. I doubt that anyone can really claim to be a "TuM Jew" unless he/she is in an academic setting, while TIDE is universally applicable.

To my mind (and I confess that I have several prestigious opponents from both sides in this regard), the question is not whether or not TIDE and TuM are similar or identical, but whether they are compatible. To my mind, the answer is a slightly qualified but definite "yes."

I would not want YRSRH to merge with YU, but I do wish that there was more compatible back-and-forth between the two institutions. Imagine Rabbis Schachter, Willig, Cohen, Reichman, Goldvicht, Sobolovsky, Simon, Maybruch, et al giving guest shiurim at their children's yeshiva; imagine residents of the kehilla showing "MO" Americans how to establish a proud autonomous community without compromising one hashkafic principle... what we could have had (and maybe still could have) in my beloved WH...

TIDE has two components (as Mordechai Breuer points out). It is a philosophy of life, but it is also an educational philosophy. I was discussing the educational component. But you defenitely have a good point concerning the communal part.

Like you, I don't care for any type of merger, but good relations would greatly help. (I'm not so gung-ho on all those rosh yeshiva you mentioned either.) As the one who must not be named (Danny Frankel) once wrote, YU is far more similar to Breuers (even supposing that their philosophies differ) than Lakewood is.

In other words, RSRH heavily criticizes the Rambam in his "Nineteen Letters" (for the same type of reasons that some people, based on their ignorance, criticize YU), but I think it's a given that RSRH was closer in thought to the Rambam than he was with the Satmar Rebbe.

Yet, in KAJ's yeshivah today it seems that they would hire the Satamr Rebbe over the Rambam any day, just like they hire people from Lakewood over people from YU.

The whole situation is so ridiculous that it is actually painful to write about. Last example: take a look at the person who runs the KAJ high school (just the way he walks and talks) and tell me if you cannot get any more Eastern European than that.

(As for knowing me, I'll tell you next time I see you.)

On further thought I don't agree with you that TuM is only an academic philosophy. I don't think Rabbi Revel would agree nor would many authors of articles in the Commentator.