In one kid and out the other 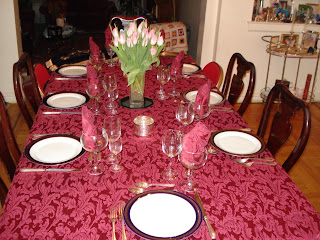 Thanks to this "lovely" custom Yeshiva's have gotten into of sending the bochrim out to the far corners of the earth to fundraise the week before Purim, we were the beneficiaries of another weekend with Joseph. (I'm flattered that he chose us over San Diego....). He spent the latter part of the week in Monsey and then arrived home chilly (Florida winter clothes aren't exactly Monsey winter clothes, lol) and rumpled, but smiling widely late Thursday night.
Michael already had plans to go to Rabbi Friedman's house for Shabbos. I suppose he felt that since Key Food already has Pesach groceries on the shelves :-O, it is merely a matter of days before Joseph will be home for Yom Tov again anyway, so he wouldn't be missing too much. 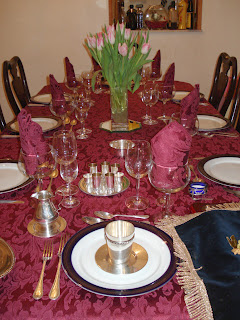 The meal included cantaloupe with kiwi, matzo ball soup, chicken, apple kugel, beet salad, asparagus and banana chocolate chip cake for dessert. {Don't tell the guests - - - they were supposed to have peanut butter crunch ice cream for dessert, but that stayed in the freezer when I noticed that nobody had eaten this week's crop of bananas, which means..... (all together now..... "BAKING TIME"
Posted by G6 at 7:42 PM