Heshy over at FrumSatire shared his very amusing experiences at his father's wedding this week. (When my mother recently got remarried, I wasn't even invited, but from the looks of things, I have a feeling her Bnei Brak affair went quite differently {grin})

He also posted additional wedding pics on Facebook - one of which leads me to a rant all my own. Whatever happened to Keitzad Merakdim? What ever happened to fulfilling the mitzvah of being mesameach chosson v'kallah? This infraction seems to manifest itself in different ways as it spans the spectrum of Jewish culture and hashkofos but it no one expression is less egregious than another. 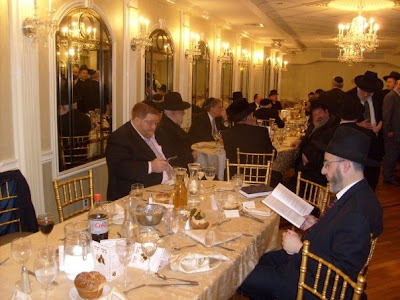 (Interesting that both men are at the same table and accoding to Heshy, in this position the entire time - photo reposted with permission)

If you honestly believe that your learning is MORE important than the previously mentioned mitzvah, then perhaps it would be better for you to decline the invitation and remain in the beis medrash where your kavanah will not be disturbed by the band. Or do you honestly feel that your presence is of such magnitude that merely being seen will enhance everyone's simcha?? When all is said and done, it is a form of hubris. I've seen people stand in the FRONT row at chuppahs with seforim open and it's plain RUDE. The gedolim of yesteryear were apparently tremendous "amei ha'aretz", since this is a relatively new phenomenon.

And don't think the Blackberry Boys are any better! Rude, childish, hubristic - a veritable trifecta. Kindly take it outside (no issur of Blackberries in the bathroom to my knowledge) and please refrain or excuse yourself during video shiurim as well... the glow is quite distracting and we all already know how "important" you are.

That said, I'm going to briefly step over to the other side for a moment by saying that baalei simcha should attempt to make weddings that are small enough to be considered "simchos" as opposed to "conventions" so that their guests will all feel welcome and an integral part in adding to the joy of the day. Addtionally, weddings should run on time out of respect for the guests as well so that they can all get back to their learning and their blackberries as quickly as possible.

okay, I spend almost every chuppa I go to now texting my husband or my sister. How horrid is that? I love it.

And I have never been a big fan of people who yank out a sefer at PTA, Shoprite, red lights, or family sheva brachos. Like, hello, how important do you think you are?


But:as far as the learner at the wedding goes... come on! we all have affairs we are dragged to by our spouses that we don't want to go to. Or we have had too many in one week. Maybe he was giving a shiur the next day and went to the wedding straight from work.

I am straddling the fence on this one

I suspect a lot of this is because people do NOT limit simchas to a schuedule. But to be talking on the phone or learning in the front row at the chuppah, is definately RUDE

im sorry but i think it's totally disrespectful and inappropriate to text during the chupah. if you plan on doing that then just don't go. or if you're being dragged to the simcha go to the bathroom and text. seriously, its a serious time for everyone.

I have even seen very young teenagers sitting and learning at the table of the kabbolas panim. Who are these kids' teachers?! What stupid notions do they fill their heads with?

It's unfortunately no terrible surprise. These are ths same teenagers who sit dumb at a Shabbos table because they have no idea what to do or say. After all, they're not learning. Yikes! What do we do now? Talk about life, world events? What? Who ever heard of that?

Maybe it's just as well that these kids sit dumb. If somebody is nice and asks them to deliver a dvar Torah, they finally open their mouths -- and deliver a barrage of Yiddish, Hebrew, Yinglish and a smattering of English thrown in for us dumb baalei batim.

I'm going to add another two cents based on the previous comments.
If you're being "dragged to" a wedding, perhaps you shouldn't bother going, because the hosts are paying a hefty price for your reluctant attendance.

and how about saying tehilim while driving? unless you are a real tzadekes in the making, and your every waking moment is filled with platitudes to hashem and perek shira and tehilim, how can you say tehilim while driving? I am not making this up: observed at a red light and a stop sign (hello, who actually stops long enough to read anything??) a woman saying tehilim. I say, just give yourself 15 extra minutes at home and say the tehilim then. sheesh

tembow: you know what? you are right. It is rude. I shouldn't do it. Plus I look a bit stupid, since I am twice the age of the girls lined up on the side who are all texting.

Lets say your tired of dancing, and theres no one at your table - why cant you learn then ?

Because it's not nice. Hasn't anyone ever taught you manners?

Reb Meir If there's no one at your table to whom should you be nice to ? Better one should learn a little or be meharher in the 6 mitzvot temidiyous than to sit there like a luch. Hey, if you'd be there I 'd shmooze with you.