How Adventurous Are You?

This is the question Aviv asked before coming to stay with us for Shabbos Chanukah.
He brought with him a selection of Chanukah Themed Sodas - "jelly doughnut" flavor, "applesauce" and "chocolate coin" flavored as well. Thankfully (??) the "latke" flavor arrived broken in shipment. That might have been a bit much for me...... The entire crowd sampled the assortment, while the more adventurous of the bunch (i.e. Aviv himself, lol) actually attempted a bit of "flavor mixing". I say they all could have done well with a shot of vodka added.........................
Motzoei Shabbos Moshe, Erica and Aviv stayed, Estie stopped by and we had a bit of a game night and a wonderful pizza fondue served up with garlic bread chunks. It was such a hit that it is definitely going on the New Years Eve party menu.
Sunday night I made fresh latkes for the second time and after that we went over to Yosef B's for an impromptu get together - loved the little chanukah votives... I am such a sucker for chanukah kitsch...................
Posted by G6 at 11:54 AM No comments: 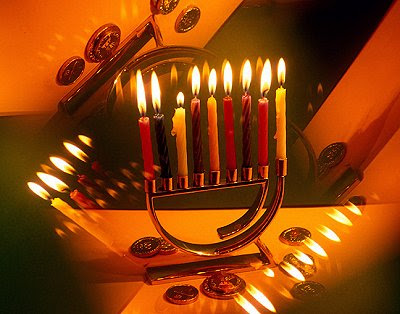 May the light of Chanukah burn brightly in our hearts and souls and bring warmth, comfort and enlightenment to all.
Posted by G6 at 2:08 PM No comments:

Moshe took excellent care of Erica when she was sick last week. So much so that he NOT ONLY made dinner, but he DID THE LAUNDRY and baked cookies!!!
I emailed Moshe a "mitzvah note", telling him how proud we are that he takes such good care of our daughter.
Now his facebook.com status reads - Moshe is a mitzvah boy (go ask my mother in law....).