I NEVER IMAGINED HOW THIS BLOG WOULD IMPACT MY LIFE...

I started this blog simply for myself. It was a way to keep a journal of sorts - a chronicle at first, mainly of the guests we had for Shabbos. Later, it morphed into a way for me to express my feelings about family, friends and the community I hold so dear.

But as you will soon see, this little blog took on a life of its own and grew. It grew to have more impact on my life and on the lives of others than I ever imagined.

It began with a few emails:


"Thank you so much. I haven't heard the Yekkishe niggunim of my youth in a long time. It takes me back and makes me happy."

"Your table photos look lovely. Do you have space for two more this Friday night?"

I met so many new people and suddenly I was a member of TWO beautiful communities - the one in which I currently reside, and the great online Jewish community that spans the globe.  I met countless bloggers and followers, many who eventually arrived as guests at my Shabbos table.  I received emails that proved the "six degrees of separation" rule over and over again:

Long time follower and commenter, Mrs. S. recognized my nephew in a photo I posted and came to realize that even though she thought she was reading a stranger's blog all this time, we are actually related by marriage!

And THEN one day came the message that would by far have the most impact on our family than any other arising out of this blog.  The aforementioned Mrs. S. - a woman who began reading my blog without  knowing me at all, who is living in Eretz Yisroel, who I likely would never have met if not for this blog - contacted me, and wondered if Joey might be interested in dating her cousin.

People have criticized me in the past for blogging so much about my family. In this instance, Mrs. S. felt that the blog gave her a good sense of who we were and what we stood for.

I now realize what a great debt I owe to this blog. Without this blog, Joey and Kayla might never have met.
Think about THAT all you blog naysayers ;) 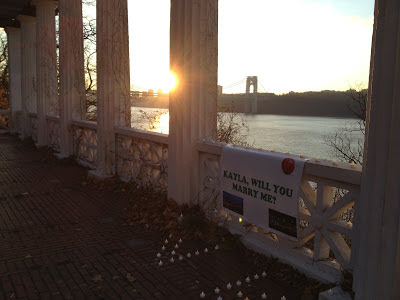 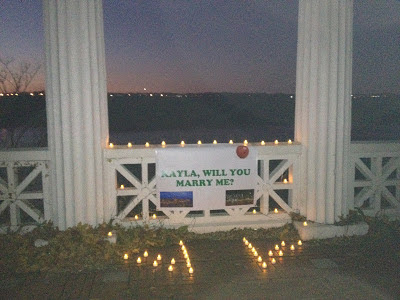 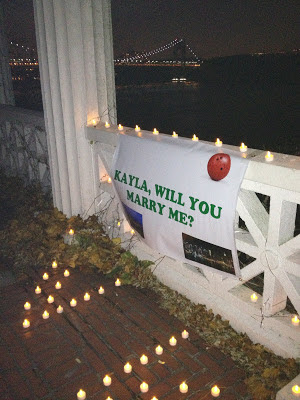 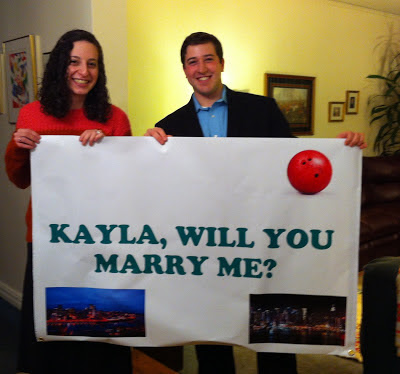 I had hoped to blog about this earlier, so that you'd have more time to check it out yourselves, but I only made it out to Columbus Circle yesterday, to view the clever art exhibit entitled "Discovering Columbus".
You might have seen the statue of Columbus towering more than 75 feet over the area, 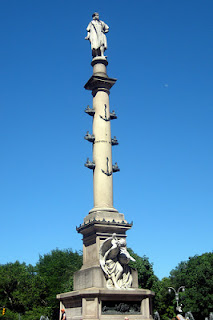 but you surely never had a chance to examine it from this vantage point: 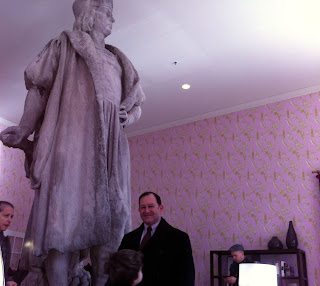 Japanese artist, Tatzu Nishi, came up with the idea of making statues perched high above the ground (much more prevalent in Europe than in the States), accessible from a most unique perspective, by building a living room on a scaffold, around the statues.

For his first public project in the United States, he built a fully furnished living room around Columbus, complete with sofas, chairs, bookshelves, a television, lamps and draperies on the windows. The scaffolding will serve the additional purpose of allowing for maintenance on the statue when the exhibit closes. 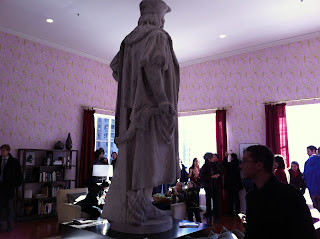 Tickets to, and more information about this free exhibition, which sadly closes December 2, are available here.

How did we get up there, you ask? We climbed the stairs! (Though an elevator is available upon request ) 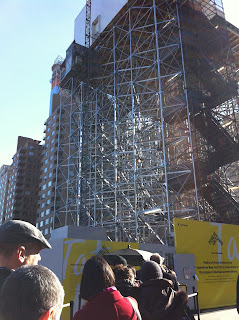 Not Because It's a Holiday or Anything......

If you are thankful that kosher turkeys are 30% of the price of kosher chickens this week, I present to you the best turkey carving video I have ever used. (I'm thankful for that too...)

... and a table photo because I think it is so cute that Avram found ladybug candles to match the ladybugs on the vase I painted. 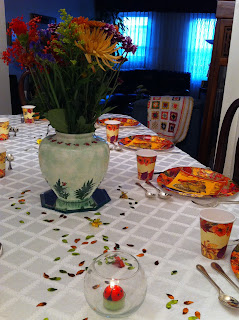 Life By The (Children's) Book

Though I definitely pride myself on trying to live my life by following the blueprint set forth in THE Book, once in a while I have to smile at how the wisdom and truisms laid forth in children's books become part of our lexicon and help guide us through or merely find the most succinct way to express and define, the hills and valleys of life.

Take this week for instance. I arrived at work one day to find that an event which had taken place the previous night, had really left the premises in a state. All I could think of ways, "... and this mess is so big and so deep and so tall, that we cannot clean it up, there is no way at all...." (give yourself props for knowing the source immediately)

What is it about these children's books that resonate with us decades after they cease being a nightly bedtime ritual?

What phrases have stayed with YOU through the years?

Chanukah is fast approaching and it provides so many opportunities for creating family traditions.
In my house, we decorate the light fixture, hang 20+ year old dreidel cutouts, lovingly created with Erica's playgroup, on the front door, hang my 1930s photo of my father and uncle playing dreidel in Germany and eat sizzling hot and crispy latkes (best fresh from the pan!).

It's also time to bring out all the assorted Chanukah kitsch, dreidel hand towels and of course - remind you all to send in your menorah photos for the third annual Guess Who's Coming to Dinner PIRSUM PROJECT!! Yes, photos are once again being solicited. Email your lit menorah photos to guesswhoscoming2dinner@gmail.com and let me know how/if you'd like to be credited. Share the beauty. Share the light!

And now, just in time for Chanukah, there is a NEW WAY to have some fun and win cash and prizes, with the Chanukah House Contest!  New from Manischewitz is the Chanukah House Kit, which comes with everything needed to build and personalize a tasty Chanukah house including cookies, icing, and decorating accents. 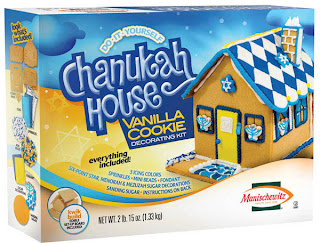 It’s simple to enter. Participants submit a photo of their completed Chanukah House to the Manischewitz Facebook page for a chance to win prizes of money or Manischewitz products.

Here at Guess Who's Coming to Dinner, the contest just got EVEN EASIER!
Enter to win the entire kit shipped directly to your door in time to assemble and enter your photo before the December 15th deadline!

You can earn multiple entries to this random drawing by posting in the comments section in any or all of these ways:
Contest closes Wednesday, November 29th at 9 pm EST and is open to US residents only.

We're Not All Bad

I've heard people postulate in recent weeks as to the causes of Hurricane Sandy. I've heard fire and brimstone sermons and read numerous articles, chiding Kal Yisroel for a multitude of sins which our self-proclaimed prophets say have precipitated this horror. (I'm not even going to comment on my thoughts regarding the trauma inflicted on people who have sustained significant damage to their homes, who are then forced to hear that it is due to their own evil ways....)

I would like - VERY HUMBLY - to put forth an idea that is quite the opposite.
We live in a world that can easily make us lose faith in humanity and in goodness. Sometimes it takes a tragedy like this to illuminate all that is RIGHT in the world. People are not all bad. Before, during, and after this storm, we have been inundated with stories and images highlighting tremendous acts of chessed and generosity, depicting all that is RIGHT with this world. And did you ever notice that acts of humanity are contagious?

Maybe - just maybe - it's time we stop looking for the worst in people and start noticing the BEST in people.
Posted by G6 at 8:55 PM 4 comments:

Sushi is just one of those things.....

But whether you love it or you hate it, you must admit that there have been some beautiful presentations done with sushi.  I've been at functions where the artistic presentations have mimicked stained glass windows, flowers and more.

Enter the lowly gefilte fish... a Shabbos staple in many households.
I'm always on the lookout for creative plate-scapes.
Often I make tricolor gefilte fish.
Sometimes I simply decorate the plate around the fish as I did here.

So when I saw a recipe for sushi gefilte fish from the newly published Chic Made Simple cookbook, I knew I had to try it! (I have not been compensated for this quasi-review, but if Feldheim wants to send me a free cookbook for this heartfelt recommendation, I certainly won't send it back ;) )


What a fun way to serve gefilte fish this is! Aside from the nori, the ingredients are all traditional - fish, carrots, red peppers....
Let's hope it tastes as good as it looks! (Actually, I know it does already, because I trimmed the ends off the rolls to make them sharp and even and I couldn't resist tasting the "shnips") 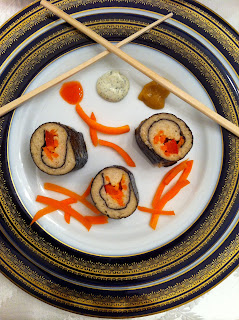 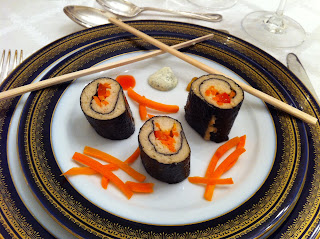 The Summer Town of my Youth...

I know this blog has a bit of a "nostalgia factor" for some of my readers.

I thought I'd share this segment that aired on today's Today Show, about the beautification of Tannersville, NY - the summer retreat for generations of Breuer's members.

Visit NBCNews.com for breaking news, world news, and news about the economy
Posted by G6 at 10:52 AM No comments:

This was sent in by a reader whom I'm choosing to keep Anonymous, because even if he doesn't care, HE SHOULD care about wasting his vote this way ;)

(Though full disclosure - our state is a done deal anyway. His vote wouldn't matter)
Thanks for the "vote" of confidence though! 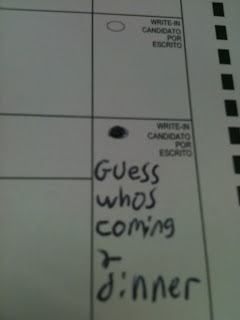 THE ROAD I NEVER WANTED TO TAKE
By: Not Robert Frost

Today’s the end of all the trauma
If you’re alive and not a zombie
You know now ends a year of drama
Between Mitt Romney and Obama
You know Election Day’s upon thee
Both Democrats and Republicans
Irritating us through 2012
Once you have tossed your filled ballot in
At last a brief respite begins
As they’ll now just fight amongst themselves
My election headache will subside
Brought on by ads you cannot escape
Shouting for us to be on their side
Yelling that the opponents have lied
Now their dull roar shall at last abate
I shall be telling this with a sigh
Four years from now when we will regress
But I’ll step into that booth and I-
I’ll check the box next to one guy
And that vote still matters nonetheless
Posted by G6 at 12:37 PM No comments: 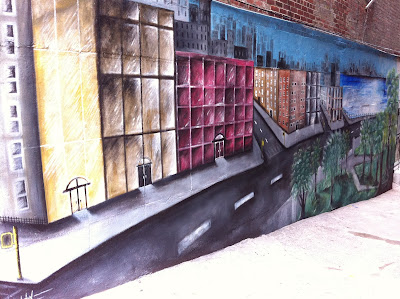 This mural just popped up recently near my home. Somebody is trying to create a little beauty in an otherwise drab little alleyway. More power to him!
Posted by G6 at 8:37 PM 4 comments: