Why Are Proofs Called Proofs?

Yes.... amazingly, the wedding proofs are in already!
I'm on photo overload. Too many of the same thing :) .
But I'm curious to know why proofs are called proofs....
Anybody?
Posted by G6 at 10:33 PM No comments:

I wrote a while back about our friend Norby. B"h he's doing much better.
Norby's family started a Refuah Sheleima Page.
Please visit his page for updates and sign his guest book.

Please refer to my post about People Who Need Professional Help (a.k.a. D). Read also my follow up post on being Dan L'kaf Zechus.
Now I've gotta tell you... it was REALLY hard for me to truly internalize my favorable judgement of her..... but I succeeded - - - UNTIL TODAY. Believe it or not SHE DID THE EXACT SAME THING AGAIN.
Now mind you.... she's a adult, or a fair approximation of one. And to top it all off, several weeks ago my husband confronted her about her door slamming rude behavior and she told him, quite loudly, that he had no right to tell her how to behave. But this is just over the top funny - or sad - depending on your point of view.
May Hashem grant a refuah to all the mentally ill people among us....
Posted by G6 at 9:02 AM No comments:

..... Le Gabay is even MORE fun to dance to with abandon with your daughter at her wedding than it is with your daughter in the kitchen......
Just thought I'd share that thought as the memory flitted through my mind.
Posted by G6 at 12:50 PM No comments:

Guess who's coming to dinner?
The honeymooners !
I was reluctant to push and start off as the "annoying mother-in-law" but lo and behold, I guess they find our home an inviting atmosphere and have decided of their own accord to join us for Shabbos.
Estie is moving to the Upper West Side and has chosen to spend her last Friday night at our table as well.
Michael's chavrusah Steven is finally coming to our house too.
Chava called and in her inimitable style is arranging meals for all of her friends and will be joining us with one other guest.
So that brings us to a grand total of 11 - - - seeing as I had a week off of cooking for Shabbos Sheva Brochos, I guess I had this coming to me.
Posted by G6 at 12:32 PM No comments:

And Life Returns to Normal....

Well, it will when I'm done doing 20-25 sets of sheets and towels and remaking all the beds in the "guest apartments" that we used for Shabbos Sheva Brochos. (Oh, and catch up on about 94 hours of missed sleep....)
Everyone has now gone home - to England, to Switzerland, to Israel, to Toronto, to Amsterdam and to everywhere in between.
Everything was slow motion today.... so quiet......
I miss them all, but it WAS a blast, from start to finish.
A simcha is just an "occasion" without family and friends to share it with.
And share we did.....
Posted by G6 at 11:13 PM No comments:

With much gratitude to Hashem Yisborach, all I have the energy to say now is that everything was WONDERFUL WONDERFUL!!!


Of course my house now looks like a wedding threw up all over it, but I guess that is exactly what happened {grin}. 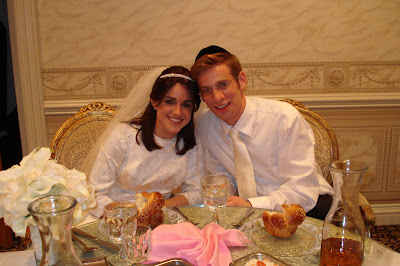 ...wow! Less than a week until the 'big day'. Erica moved her stuff out this past Sunday, including all the gifts that arrived since we shipped the first batch to my mother's, so the house no longer looks like the "beyond" in Bed Bath and Beyond. As I've mentioned in a previous post without giving proper credit, my cousin Annette described her home just prior to her granddaughter's wedding as looking like backstage at a Broadway show. I know what she meant! Wigs.... petticoats.....gowns..... scripts (ok, ok...so they are seating plans and schedules....work with me....).
People stop me in the street and ask me how I'm feeling. They want to know if I'm nervous, excited, worried.... truthfully? All I am is EXHAUSTED. I really need to get some rest so that I don't sleep through my own daughter's wedding day. Perhaps if response cards would stop coming in mere DAYS before the event (I guess the world isn't made up of only yekkes, but why can't it be? {grin}) so that all the seated guests need to be juggled and re-juggled, I might be able to...
Oh, and mystery solved! The response card we received, entirely in Hebrew stating nothing else but wishing the young couple to be zoche to build a bayis neeman b'yisrael and looking forward to "Biyas Goel Tzedek, Bimhayrah Biyamenu Amen!" was just another Lubavitch way of saying YES. Who knew? :)
Posted by G6 at 5:00 PM No comments: