Never Trust a Guy with a Bad Haircut to GIVE YOU a Haircut.

For years, my darling Avram has been having his haircut by Enzo, a guy with a huge comb-over, and I have not been happy about it.....
Now depending on who you want to believe,
(a) my gentle prodding finally paid off,
(b) Yosef's insults were finally too much to bear or, more likely
(c) Craig's toe-tapping as he waited for Avram to do the whole "blow dry thing" after their gym workout was overwhelming.
But I don't even care who gets the credit for the change, because thanks to the talented folks at Dramatics, I've got the cutest looking husband around!!! {Don't mind my goofy face, I'll be grinning for a while}
Posted by G6 at 9:23 AM No comments:

I cut my finger on the serrated edge of the Cling Wrap box today and it hurt like the dickens. Joseph tried to tell me I was being a bit hysterical by baring his latest ugly, festering, angry red, scabby sports injury, which covers the better part of his left elbow & forearm.
Just as I was about to feel truly wimpy, Eric said something profound. He said that our bodies expect wounds as large as Joseph's to hurt that much, but precisely because these tiny cuts are as small as they are, the pain we feel is totally out of proportion. This little cut, like many a paper cut, barely visible to the naked eye, can throb so badly that it makes us crazy. It hurts when you move it; it hurts when you don't move it; it hurts so much that even the air passing over it causes pain.
So thanks Eric, for making me feel like less of a hysterical female - - - oh, and thanks for the mac 'n cheese pizza too..........
Posted by G6 at 5:20 PM No comments:

Random Thoughts To Joseph Upon His Arrival Home

Quotes For The Day

"The nice part about living in a close community; when you don't know what you're doing, someone else always does" {This one is for you-know-who-you-are now grow up and mind your own .... [wink]}

"The best way to forget all your troubles is to wear tight shoes" {Have a GREAT weekend Erica....}
Posted by G6 at 9:30 AM No comments:

YU hosted a Dor Yesharim blood testing event last night. Michael participated (.....get in line ladies.....). Interestingly enough, what should have been a simple drawing of blood, actually developed into a nice forum for meeting & talking to other people. He came home very excited about all the interesting young men that he met there and how he might have found himself a few new chavrusas, etc. etc.
Now it occurs to me - if this event was so conducive to setting him up with new friends and chavrusas - imagine if Dor Yesharim had some sort of "supervised" mixed testing for young people! Yes, I do mean boys and girls in the same room folks... Find a mate and check compatibility at the same event. Talk about killing two birds with one stone........!
Am I inspired or what?
Now what catchy name for the event would you come up with? "Screen & Preen"? I leave the floor open. Feel free to comment.
Posted by G6 at 9:46 AM No comments:

I'm entirely too tired to come up with anything of import to say here.... who are those people who can live on only four hours of sleep and how can I learn their methods??!?
Due to this sleep deprivation, thoughts are bouncing around my head in a most disjointed and disconnected fashion.
I'll share a few but remember to watch out for flying objects and be ready to duck at a moment's notice.

A Visit to "Grovers Corners"

I went to visit my father today. Every time I go to the Beis Olam, I think of Thornton Wilder's, "Our Town". In the final act, there is a burial scene in which the dead are sitting upright and erect, like tombstones, in rows of chairs on the front of the stage. I feel that way when I go out to our Beis Olam. Old friends and family; gone but not forgotten, are sitting there waiting for my arrival and greet me with warm smiles. It is a surprisingly calming feeling.
I also think of this particular play because of the underlying message it sends. It reminds us that people live their lives without appreciating or sharing the moment of living. They overlook the joy found in simple everyday activities.
I spent quite a bit of time davening at the kevorim of my family and close friends and asking them to be Melitzei Yosher for myself and my loved ones, especially since sometimes I worry that my own tefillos are not worthy enough.... I left feeling much better.
Posted by G6 at 10:31 AM 2 comments:

Lester Is Leaving Us :(

Lester has just informed us that after this school year, he will be returning home to Amsterdam. While we know that this is the right thing for Lester, it is a very bitter pill to swallow for us.
Hopefully, one day Lester will know how much he has given to our family. Right now he only sees how much our family has given to him, but it is surely a two way street.
Lester appreciates family. Lester will come by for no reason other than to hang out on our couch and have the feeling of "family" bustling around him. Last night Lester stopped by on the spur of the moment and stayed for several hours, even though none of the kids were home. He helped Avram set the shabbos table and even folded the napkins (cute fans!). His reward was an impromptu invitation to join us for Friday night dinner, which he accepted, only after stipulating that he could bring his pajamas before shabbos and change at the conclusion of the meal.... poor Lester... the stress of this decision, among other things has given him a nasty case of insomnia....
But Lester will land on his feet - he always does.
Now if we can only come up with a reason for him to come back and visit some time ;)
Posted by G6 at 5:13 PM No comments:

I'm Not Good With Change Is it not contradictory that somebody who is as technologically savvy as myself can be frozen in terror at the thought of upgrading a cellphone? It is not that I can't learn to use the new phone - I am the one who studies the manuals like the final exam is around the corner.... it is simply that I don't do well with change. It's also the stress of dealing with the NICEST customer service people who make it impossible for you to curse at them, even though, the "system" is totally screwing you over....
Now keep in mind that the ONLY reason I finally went through with this ordeal is because my phone, and the system it was on, was so archaic, that my carrier was actually CHARGING ME A MONTHLY PENALTY to keep using it. Well, after hours and hours on hold and zillions of forced repetitions of "the last 4 digits of my social security number", I am proud to tell you that I survived the experience. And believe me, it wasn't easy... first one of the the phones didn't arrive, then one of them wouldn't "activate"; then some Einstein at Cingular (oh excuse me... the "New AT&T" - - - do I get any perks for being a customer since the days they were the "original AT&T"? NO!!!) thought it would be a good idea charge my two phones for TWO family talk plans instead of one..... oh, and lets not forget all the fun I had reentering my entire address book into the new phone. (though I must say that the photo caller ID feature gives me a childish thrill {grin}).
So I'm done, right? Not so fast............ now I gotta learn about Bluetooth.......................
Posted by G6 at 4:03 PM No comments:

It's in several "pieces", but I'm posting it by popular request... just run down the group in order.
Enjoy! 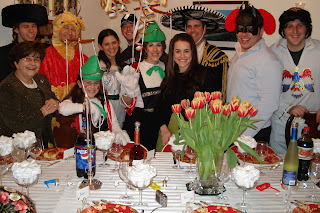 Although the last of the platters are still scattered across my counter, mingling with various junk food and homemade goodies, Purim has, in fact "left the building"...
As I finish cleaning up the detritus of countless shalach monos packages, 15+ purim seudah guests and various foot traffic in and out of the apartment for liquor, jello shots & of course haman men, I reflect on what a totally AMAZING DAY it was.
Michael leined in shul, the nursing home, the hospital, as well as for private people in their homes. Delivering Shalach Monos and checking out all the costumes was lots of fun and the weather was pretty forgiving. Purim seudah was very leibedig and was enhance by two highly entertaining grammens performed by Joseph (via telephone) and Binyomin. They had us in stitches. Michael inserted one (much deserved) rebuttal grammen stanza for Joseph. Both Michael and Binny graced us with words of Torah (thank you Michael for reminding me that Pesach is coming... I really needed that!!)
Everybody added something to the special atmosphere - - - Oma, Mark & Becky B. (and young'uns), Eric, Estie, Binny, Binyomin and Lester. Mark called it an "eclectic crowd". I call it family.
Posted by G6 at 2:06 PM No comments:

Are we there yet?

I asked Avram with great trepidation if the Haman men could go on the door when the taanis is over. You see, we usually put them up right after we break our fast, but since this year the fast is early, I was afraid he would make me wait until Motzoei Shabbos to begin the celebration (Eric won't even EAT A HAMANTASCHEN before it's time.... I on the the other hand, start doling them out Rosh Chodesh Adar).
Well, it seems that I have Dr. Erlbach to thank for this one. Avram said that the Purim Poroches will be hanging in Shul this shabbos, so he extrapolated that our door could sport the ten sons of Haman over Shabbos as well.
Of course, Erica pointed out that now nobody can get mad at anybody else this whole weekend 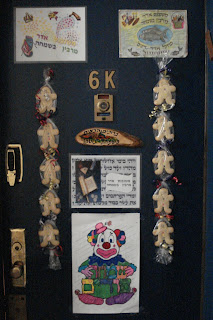