So Who *IS* Coming to Dinner??

.... well ... if you had asked me that question Thanksgiving Weekend 2005, I might have prophetically answered, "my future son-in-law". The thing is, I had no idea............
Yes, Lester was (finally) joining us for a Thanksgiving Shabbos (after the fiasco cancellation of 2004). There were a host of others coming to help polish off the turkey and fixings when, at the last minute, Lester calls and asks if he can "bring a friend". Another Lester? Can we really take two at a time? "Sure, the more the merrier".... And are we ever glad!
Thus began a year and a half long odyssey worthy of "Small Miracles". Hashem really does have a hand in shidduchim and He really does engineer the world. Our Hachnosas Orchim was rewarded with one of the most valuable gifts.
The Bas Kol went out......... we just needed to hear it!

Chol Hamoed at the Circus

So we went to the Ringling Brothers Chol Hamoed Pesach Spectacular - complete with performances by Uncle Moishy, Yeshiva Boys Choir, Bello the Clown (of course) and an all male cast suitable for most every level of observance.

I'm not sure how to effectively convey my feelings on this event but I will say that my Jewish Bretheren, as far as I could tell, did not create a chillul Hashem, which was something that often happens at such large gatherings.
I will also say that such an extravaganza - the entire Madison Square Garden, full of only frum Jews, selling only Pesachdik snacks, playing Jewish music, their world famous clown Bello, sporting peyos on occasion & dancing to the voices of a bunch of yeshiva elementary boys - is something that could only happen in America.
Although I'm grateful for this, I just hope we are all cognizant of the fact that we are still in golus......
Posted by G6 at 8:19 PM No comments:

Matzo Is Not Beneficial For the Digestive Tract 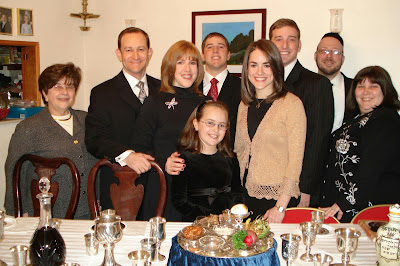 This is the picture BEFORE we all ate GENEROUS k'zaysim of matzo. Don't we look happy? 'Nuff said......
But I should mention that sedorim were WONDERFUL!!!!!!
Family, friends, words of torah, rousing renditions of Chad Gadya and Adon Olam and minimal wine spillage {grin}.
Posted by G6 at 9:49 PM No comments: 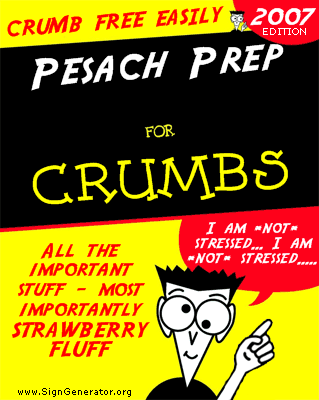 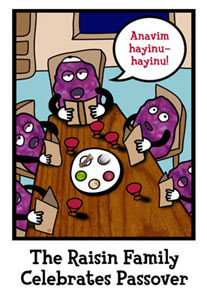