"Chossid on Chol Hamoed" - The Second in the Series...

While not coming close to the awesome picture that I captured last chol hamoed Pesach, I still felt like I should keep up the ritual.
Besides, somebody needs to debunk the horrible conclusions one could come to if they read the comments on the "eppis a heimishe news site" postings.  Those commenters give fine, upstanding frum Jews a bad name.  Most recently, in an article describing possible chol hamoed outings, several commenters got upset that anybody would "waste" time on chol hamoed outings with their families and argued for the "Beis Medrash Only" approach.....
Well, to this year's unidentified "chossid on chol hamoed" - I salute you! 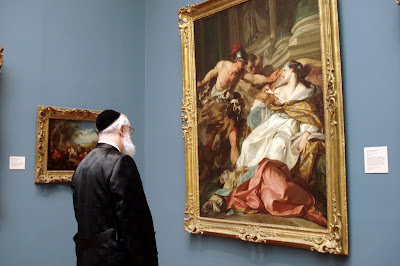 (spotted while on a family outing to New York's Metropolitan Museum of Art)
Posted by G6 at 7:01 PM

I am surprised at this one however. It is clearly assur.

See this article about the Hertzberg's Zl - it just came out
http://nymag.com/news/features/56001/

I like this photo. Wish I went to the MET on Chol Hamoed.

Do you think he's thinking how she has so much material on her dress, how come she couldn't cover her top?