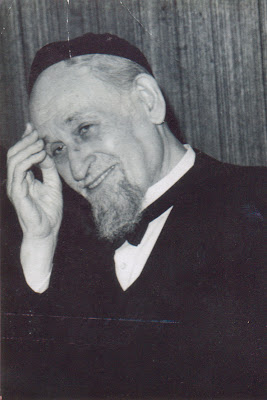 This coming Shabbos, 3 Iyar, marks the 30th yahrzeit of Rav Dr. Joseph Breuer zt"l.
The following is an excerpt from Rav Breuer - His Life and his Legacy and is reprinted with the permission of the Rabbi Dr. Joseph Breuer Foundation:

"The Midrash tells us that while Moshe was shepherding the flocks of Yisro, a lamb ran away. Moshe chased it until the lamb became ensnared in a thorn bush next to a spring of water from which the lamb began to drink. When Moshe approached and saw the lamb thirstily drinking from the water, he said: "I did not realize that you ran away because you were thirsty. You must be tired." He then carried it on his shoulders and walked back. G_d then said: "You have mercy to treat the flocks of man in this manner! I swear that you shall tend My flock, Israel"
Rav Joseph Breuer was a shepherd, concerned with his flock's every need. For some forty years he nurtured them, protecting them from the spiritual pollution that had affected so many by teaching them so that they had the strength to meet any challenge, providing them with the means to resist dissipation in the American melting pot. Like a shepherd, he protected his flock by leading them to drink from the pure wellsprings of Torah, shielding them from the dangers of cultural assimilation that had led so many astray.
His erudition and eloquence, his uncompromising adherence to halachah - they were all factors that enabled him to accomplish that which he did. There was his all encompassing vision, his uncompromising belief that what had stemmed the tide of assimilation in Frankfurt could be equally successful in America. And above it all there was his incredible yashrus, his unparalleled integrity and honesty that stood as a beacon, drawing his congregants toward him has he illuminated their lives with the light of Torah and mitzvos.
והחוט המשלש לא במהרה ינתק - the threefold cord will not easily become undone (Koheles 4:12). Building according to the plans designed by his grandfather, R. Samson Raphael Hirsch, and his father, R. Shlomo Breuer, Rav Joseph Breuer successfully constructed an edifice whose strength and vitality remain a lesson to all and have a lasting impact on future generations."

I would also like to take this opportunity to highly recommend this recently released book containing 136 essays by Rav Breuer zt"l.
Posted by G6 at 1:26 AM

What do you think he would say if he saw KAJ today ?

He'd roll up his sleeves & say "lets straighten out this mess."

I remember that he always gave me the same Brocho whenver we finished a conversation - "Zlach Urchav" (found in Tehillim 45)!

Are these essays different than the ones already published in the "Time to Build" volumes?

The new book contains 136 essays by Rav Breuer which appeared between 1914 and 1973 in various publications in Germany and here. 50 of these have already been published in Time to Build and have now been re-edited. The remaining 86 have never been published before. As Time to Build is out of print and not readily available it was felt that including the previously published essays along with the new ones and presenting them in chronological order would give the reader a more complete understanding of Rav Breuer and his life's work. It's definitely worth the investment.

Yes, those essays are very good. I read some at a friend. I forgot if there was an index. Can anyone say ?