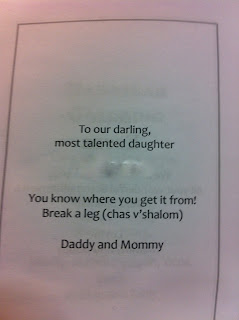 we can joke but this stupidity is rampant in monsey. ha ha now, boo hoo in years to come when we have lost all sense of humor, and everything we say and do has to have a disclaimer, like in the abie rotenberg song "and we all signed up for the kosher gym (separate hours for men and women, of course)". or like a guy I met playing tennis with his son, and he was chatting with us, saying "he wanted to learn to play tennis, so we got him a male instructor". what is the matter with us?

I would be curious to know if the ad was written that way, or editorialized.

Anonymous -
Definitely written that way.
similar comments in other ads did not contain any caveats.

I only hope this had been a running joke in her family before the show or something.

Why would it be a joke? Why give a child an ayin hara (chas veshalom)? It's very important to always say or write chas veshalom (bli ayin hara), or something bad will definitely happen! Luckily, it's so easy to avoid.

I think its a joke. And its hilarious.

@anonymous: "Why give a child an ayin hara (chas veshalom)?"

daughtersintheparsha is correct when stating that frum people have really lost their sense of humor. AND they not knowledgeable about secular culture (and don't even bother to educate themselves).

"Break a leg" is not an ayin harah, if you know about the theater. It actually means good luck.