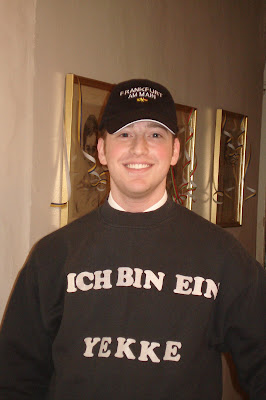 I grew up in the same German-Jewish community in which I now reside.
Every cultural subgroup has it's own "dictionary" of words, idioms and usage.
Sure, we have "aufshnit" (cold cuts) and I didn't even realize that "besteck" (cutlery) wasn't an English word until my teens, but did you know that where I come from Omer is a verb? Proper usage would be something like, "Did you Omer today?" or "Don't forget to Omer".
Somwhat akin to the British, who have been known to say that someone is "in hospital", in my neck of the woods, people "have birthday" - as in, "Opa (note: not zaidy) has birthday today... go give him a hug".
It's a good thing that I've always had friends to pull me aside and tell me, "you know this is another one of those things that only you say...".
Posted by G6 at 9:10 AM

The example of "Omering" is yet another example of where yekkes were simply ahead of the curve, in this case with linguistic conversion, or "verbification." This phenomenon is particularly acute in the technology field, where nouns become associated with the actions associated with them (e.g. "Google," "email", "text,"). Bill Watterson, in the much-missedCalvin and Hobbes, satirized this in a great strip (scroll down about halfway through the article for a reprint).

There are a number of non-American Englishisms that I think are quite wonderful. "Having birthday" seems, at first thought, to be one of them; a birthday is not something you own ("my birthday"), which implies exclusivity, but something to metaphorically pick up and examine. Another one that struck me was a great analysis that I once saw about the Irish expression for emotion being "I feel a sadness coming on me," which separates the emotion from the human identity, as opposed to the American "I am [emotion x]."

Of course, I'm possibly the only native New Yawker who insists on pronouncing "aunt" as "ahnt," so any linguistic analysis by me should immediately be taken with an eshet Lot's worth of salt (I will, however, fight with the New-England-bred Lovely Wife[tm] to my last breath on the pronounciation of "forehead," "Florida," "orange," and "horrible.")

Almost exactly like my family, also yekkes. I was even born in Washington Heights. We used besteck all the years that we were kids until I was in camp and said it to someone who didn't know what I was talking about. My siblings and I used to fight over the crispy haut of the chicken all the time. And we also fought over the mach in the mach bones in the chulent (or in the gruenkern suppe). We also eat gesetzen reis quite often. And probably a whole host of other yekkisms (or Germanisms). Of course, aufschnitt was a special Sunday treat that we would get at Fleishmann & Heymanns in Washington Heights. And we would put landjager in our split pea soup. Every Erev Pesach we eat kartoffel salat with rohwurst (now cervelat) chopped into it.

Hmm, so am I going to be confused when I come for a meal?

(*quickly goes to babelfish to translate half of what he/she posted...*)

but, alas, it usually does not go on to the next generation. My kids can all say, in perfect accent, "ich bin hungrig", and a "guten Morgen", but beyond that, alas, the German language is only used when my wife and me talk secrets. And my wife only speaks it because she learned it after marrying me (and being good with languages helps). And for items like Bündnerfleisch (air/smoke cured cold cuts) and Lyoner Wurst (another type of cold cut) you would have to travel to Strasbourg or Zürich to get it. And how among us remembers what a Gugelhopf is? (it's a cake, similar to Bundt). But my cholesterol level is grateful about that.

It is so funny you should write that!

I should really compose a post about this, but my first German word was "gestorben" (died) because for my parents' generation German was also the language they used when they didn't want the children to understand and of course, those are the words we learned FIRST ... :)

I live in the midwest but I am from NY. I have a friend who has always been bothered by my usage of "she has birthday today" I was never sure if this was just a quirk in my family or picked up from somewhere else. After reading your post I now know that it may have more to do with both my parents having grown up in Washington Height. And until I my older children read this post also I never even knew that using Omer as a verb was something I did and that others did not! thanks for the enlightenment.

I guess I can say I learned some new words today :-)