A Funny Thing Happened On The Way To Buy Gruenkern... 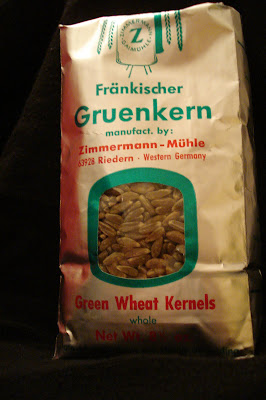 Regular readers of the comments section of my blog (that's where some of the best action is, by the way) might recall that my darling husband, who seldom asks for anything, requested Gruenkern for Shabbos lunch. This occurred during the course of a discussion which took place as a result of this post. As you can see, I agreed to make it as long as he did the legwork and bought the ingredients. Well, he came home this evening with the meat in hand, and I figured that I should at least meet him halfway and buy the Gruenkern.
You might say that I took the "long way" to the store. Scraps and I decided that the night was far too beautiful to waste so we walked the span of George Washington Bridge after dark. This is the view from the New Jersey side. Pardon the blur, but on camera settings suitable for night photography, you realize how much the bridge shakes!
More photos taken on previous bridge walks are viewable here, here, here and here... (hmmm.... does something tell you that I think this is a worthwhile excursion?) 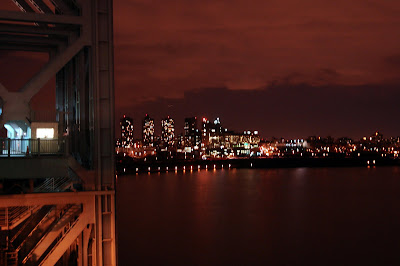 Update: The recipe for Gruenkern is now available here.
Posted by G6 at 11:24 PM

More important, where can you buy it in the metropolitan area???

Gruenkern (green wheat kernels) is produced in a relatively small area in Southern Germany around the town of Boxberg. In short it gruenkern is basically roasted spelt.

It is a traditionally German (Jewish) dish. It can be prepared with either whole or ground kernels (the stuff of many family feuds ;) ) in a soup/stew as an alternative to Shabbos chulent.

In Washington Heights, it is available at the Kosher deli counter in Key Food (Lechayim) and at Smile Deli on 181st Street.

I am told that there is a store in Teaneck, NJ that also carries it, but I'm not sure exactly which one.

You can also order it online, but it is more expensive.

For the first in a series of three videos on the harvesting of gruenkern in the "old fashioned" way before the implementation of machinery, click here.

You can buy it Monsey, at at least two stores.

harry-er than them all said...

mmm, gruenkern is good. Its a good alternative to cholent if you don't want the stomach aches that come with the cholent.

That Gruenkern movie should win an Oscar. Outstanding.

I am SO jealous!!

You and scraps are becoming besties- after I made the shidduch- and I haven't even met you yet!! Waaah!

We couldn't find Gruenkern at Pomegranate. Had to settle for Organic Wheat Berries.

I guess Pomegranate doesn't have *everything*!

Rafi, Gruenkern Suppe is really quite good. It's a nice change from chulent (for those who eat chulent often).

chulent? you cant seriously be posting on this site about people eating chulent shabbos morning. we go with soup, not chulent...

Do you know if there is anywhere in Israel to get Gruenkern? Or is there something that can be used as an alternative? we would also need the recipe of course....

Still looking for it in Queens, Brooklyn or Long Island.. can't find it online either. Any ideas?