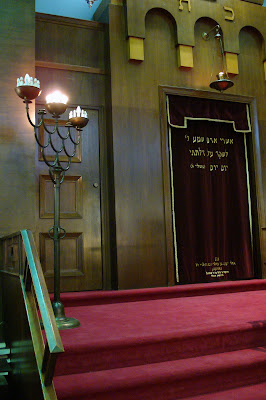 We had a bris today in our shul (well, not technically in shul, but that's a post all to itself).
I thought this might be a good opportunity to give you a brief history of the Bris Menorah which stands on the side of the Aron HaKodesh opposite the Chanuka Menorah. (To see both menorahs in one photo, refer to this post.)
The Bris Miloh Menorah in our Bais Haknesses contains three sets of lights to accomodate the possibility of three bris milos taking place on one day or within three days of each other.
Each set of lights consists of one large center light surrounded by twelve small ones. On the day of the bris all the lights are lit. On the second and third day only the center light remains lit.
The twelve small lights represent the twelve shevotim. With the bris miloh the little boy is now officialy a part of Klal Yisroel. The center light represents a light of shemiroh (protection). We know from the Torah that the first three days after the miloh are the most critical and this light serves as a protection over any danger that might occur.
In Frankfurt, the Bris Miloh Menorah had a gas light in the center and was surrounded by twelve candles. I have been told that after davening, the mohel used to take the twelve candles and use them at the Bris Miloh seudoh.
When our shul was located in 90 Bennett Avenue, across the street from its current location, the menorah had an electric bulb in the center which was surrounded by twelve candles. When the new shul was built the menorah was completely electrified.
Posted by G6 at 9:27 PM

What a lovely minhag! All these years, I thought the center light was surrounded by eight lights, one for each day leading up to the brit. That's what I get for always staying in the back rows.

You almost needed an extension this past week, though: at last count, I believe we had seven boys born in the neighborhood in the last ten days!

Has anyone donated a bris milah paroches yet? I sense an opening...

When you say that there is one large light and 12 surrounding lights, I wonder if the source is not the Gemara which says that the covenant of the Bris Milah is a thirteen-fold covenant, as hinted to by the 13 appearances of the word Bris in Hashem's command to Avraham Avinu.

That's pushing it, but I'll convince Victor (the KAJ Shamess) if someone is willing to donate it.

I don't check your blog so often but I did today, and I want to thank you for that detailed
explanation and description of the Bris Menorah, a real contribution for people who probably
had never noticed.

Also, your list of the 7 minim for this shabbos is a wonderful guide.

You really are a great source of valuable information.

That means so much to me coming from you.

I hope to always be able to provide a variety of articles that will appeal to my very diverse readership.

Thank you for this great post. If I may add…

The Minhagim of Worms (R. Jousep [Juspa] Schammes) cites this Minhag as follows: On the morning of the bris “The father of the child should wear his Yom Tov clothing (including the Mohel, Sandik, and Mother – even an Avel during Shiva. It should be Shabbos clothing [Chavos Ya’ir]). He should bring with him the large wax candle [that was prepared within three days of the Milah by the women] which is called a יוד"ש קער"ץ – Yudish Kertz, and the twelve small wax candles. He should also bring a small jug with wine in it for Metzitza. The Yudish Kertz should be placed near the Amud opposite the Chazan and it should be lit immediately. It should be lit for a period of three days and then it can be extinguished…the two chairs should also be set up for the three day period…the twelve small candles should be lit by the one honored with lighting the candles before Borchu. Four of them should be placed near the candelabra on the right side [to the right of the chazzan – Chavos Ya’ir] of the amud, four should be placed on the left [left of the chazzan – Chavos Ya’ir] of the amud …and four on the four corners of the Migdal (the Bima were the Torah is read from – I think) [The outside corners of the Migdal – Chavos Ya’ir].”

R’ B.S. Hamburger’s notes on the sefer says as follows: “The custom in Ashkenaz (Germany), also quoted in the Maharil, was to light a ner tamid which would last three days after the Bris. It is a big candle made from wax. It is called a Yudish Kertz which means ner tamid. The source for this custom is from the Talmud, Sanhedrin 32b…?? in Sharvit Zahav writes, ‘I am very happy when I come to Ashkenaz and see that they keep a candle lit for three days continuously so the congregation can see [the candles] when they come to pray. They will seek mercy for the child since he is weak for three days…’ The women gathering within three days prior to the bris is called by the name of this candle – Yudish Kertz since it is made by them during this time (they apparently do other things during this time period – there is a list).
“The twelve small candles are references to the twelve tribes…[sources, more sources]…R’ Yaakov Emden writes, ‘we add many candles by the milah since the verse in Esther says the Jewish people had much light…this refers to Milah…’”

It would seem that today, some places still use wax. The twelve small lights are called Shevatimshe. Apparently there were all sorts of arrangements for these twelve smaller candles that was practiced in different Kehillos.

(For similar posts (but not this one!), check out the forum on kayj.org).

I would respectfully suggest amending this paragraph:

"We know from the Torah that the first three days after the miloh are the most critical and this light serves as a protection over any danger that might occur."

Lights to not serve as protection, the RBSO protects, and the light, as YDL brings down in the comments, merely reminds the congregation to daven for the infant.

YDL, do you have some kind of encyclopedia handy every time you comment on this blog? I would love to purchase it for my father in law whom I think really knows alot of the minhagim but could use your sources to fill in his gaps (and he was BORN in Frankfurt)

Of course the light is only symbolic. Our religion is filled with symbols which are not meant to be taken literally. Lights/candles alone are constantly used in this manner such as the light lit for a niftar during the ovel year and on yahrtzeits, lights at the omud (they're not there just so the chazan can read the siddur!), the extra lights in shul and the 24 hour candle lit on Yom Kippur, Shabbos candles, having candles on the table at a chupah, etc., etc. I don't think that anyone would really think that "protection" was meant literally.

I seem to recall many years ago seeing all three lights lit at the same time but I don't think all three bris milos took place on the same day.

Well, he beats me. I was born in Brooklyn (ugh, shudder :) The source I used this time is the Mihagim of Worms, notes by Chavos Yair, footnotes by R’ B.S. Hamburger. It was put out by Machon Yerushalayim and is, unfortunately, out of print (I got very lucky to obtain a copy). It is very comprehensive. I’m sure some people in WH have it. More practically, there have been four volumes of Shorshei Minhag Ashkenaz that have been printed. They are all out of print, but you can still find volumes 3 and 4 in various seforim stores. They are very encyclopedic. (You can see the table of contents here:

A yearly journal called Yerushaseinu is available. So far three volumes have been released; the first one is out of print, 2 and 3 should still be available. Besides for that – I like this kind of stuff so I collect articles etc. on Yekkish topics, including some from this very blog. He may enjoy the above mentioned forum. (A shiur from R’ Hamburger (intro by R’ Eliezer Feuer and R’ Moshe Katzenstein) can be heard hear: http://www.yiwb.org/Rabbi%20Hamburger.mp3)

Anything R' Hirsch related has little to do with all of this.

I had learned that the reason for the "bris lights" is as follows:
When the Greeks (in the time of Chanukah) forbade the Jews from performing the mitzva of bris, many people still did it in hiding. The secret sign to tell people that there would be be a bris that day was to light a special candle in shul. After the fall of the Greeks, this minhag was kept and then morphed to what we have today.

Moshe -
That's fascinating.
I'd never heard that before.
Thanks for taking the time to comment!

One Motzai Shabbos Chanukah I waited on with the kids to get the Shul candle from the menorah and i got one and was walking down Bennett someone told me when he was in Frankfurt they used to use the candle for Yom Kippur.