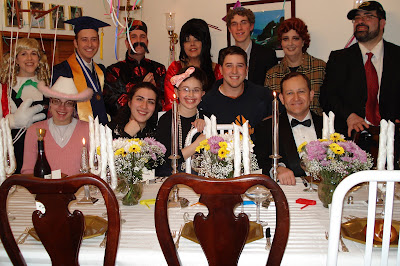 The icing on the cake for a Purim Seudah which includes family, "like family", friends - both old and new is a grammen in which each and every person present occupies a verse.
Due to the fact that many of us have been lobbying Joey to "be nice" this year, he started his grammen with a poem entitled, "How the Grinch Stole Purim".  The grammen follows.
As I noted previously, in order to protect one or two "family secrets", I needed to cut out small sections (including 2 punchlines) from the videos.  You are missing a sum total of less than 10 seconds.  Please don't ask me what was said... if I could have told you I would have!
First, a short clip of Avram introducing Joey.  He managed without the new (hipper?) pair of reading glasses which he had donned for earlier stanzas of his poem, after Michael thought they were part of a Purim costume.....
The rest of it pretty much speaks for itself....  pretty impressive considering that Joey had not previously met two of our guests.
As a post script, I must add that Jonas, our new friend from Berlin gave us the biggest compliment possible last night.  On his way out the door he said that he is tempted to return to the United States at this time next year just so that he can join us once again for Purim Seudah! He will be most welcome.
Private P.S. I think that if you realize that somebody has ideological and/or political differences with you (and you occasionally butt heads about things) but you also realize that nothing is meant personally and you show this by dropping off unexpected Shalach Monos - it's a very CLASSY thing to do...
Posted by G6 at 1:48 PM

a suggestion for next year; typing up the grammen in advance will save time and fumbling around in the notebook :)

Joey responds:
"Yeah, that would be assuming that I finished the grammen more than two hours before I sing it..."

Wow that's a nice idea! You guys rock with your Purim celebration!

BTW, it's more fun if you do the grammen off the cuff. It's also much more dangerous!!!

your son is really cute. how old is he?

Frayda -
Did you ask this question for "personal/tachlitic" purposes {wink}?