Strawberry Fluff - The Recipe and the Ritual... 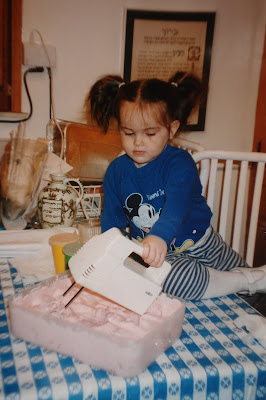 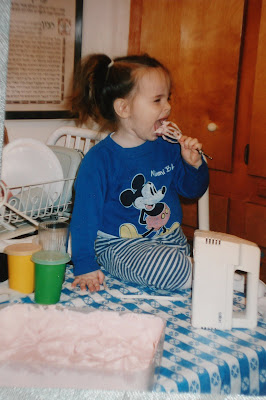 If you ask me how it all started, I couldn't really say......
Early on in our marriage Avram mentioned that his mother always made frozen Strawberry Fluff for Pesach and he loved it (my apologies to the non-strawberry eating set - double apologies if you are also part of the non-gebroks set because I'm now two for two on not having a recipe for you.... maybe the third time will be a charm {smirk}).
Always looking to please my darling husband, I dutifully went to my mother in law and got the recipe. It was simple, light and a big hit time and time again.
The only problem was that the recipe involves beating the confection for a full 10 minutes. Having only a handheld beater for Pesach, this became a tedious affair.  As my children grew, I enlisted their help and we would all take rotating turns holding the beaters for a few minutes each.  The little children looked so cute with their chubby fingers intently grasping the vibrating mixer (sometimes causing the most endearing bounce to corkscrew pigtails....) that I began photographing the moment.
As the family grew, a record of sort was taking shape. A record of "Strawberry Fluff" pictures.
There's the year Jen was so small that she sat ON the table to have the proper advantage over the bowl.  There was the year Erica was nearly engaged to Moshe and he was back in England for Pesach so she wore a London T-Shirt to the proceedings so that when she forwarded the picture to him, he would know she was thinking of him.... As the family got larger, it became a scheduling nightmare to get everybody together for the Annual Strawberry Fluff Making event.  Believe it or not, last year, even with two married children (one set on their way to England) EVERYBODY made it!
This year, I doubt that will happen, but perhaps that is a record of its own.  Time marches on. The children grow and move on with their own lives.
And I will still continue to make Strawberry Fluff for when they stop in to visit ☺
Strawberry Fluff
2                     egg whites -- beaten
1/2           cup  sugar
1               pint  strawberries -- sliced
Beat whites while slowly adding sugar.  Beat in strawberries. Continue beating at least 10 additional minutes.  Freeze. 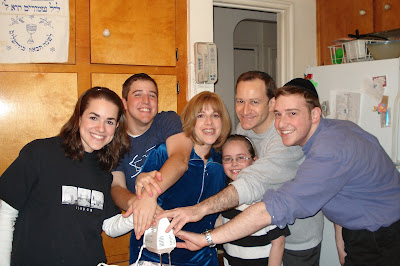 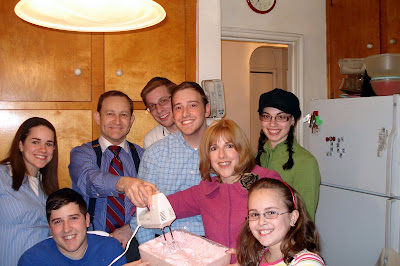 Fabulous! I love it!

Now, THAT is a feat! (Getting everyone together on erev peasch or thereabouts.)
I must confess that as I came to the page and saw the top picture I was shocked! WHAT?!?? She's already COOKING!??!? LOL!!!!!

you cook for pesach in a shaitel??

Oh, that's wonderful :-) I think it's a great family ritual!

Apparently not just a Shaitel but a suit with a flower pin and all.

OK everyone... simmer down now...
I *do* sometimes cook in a shaitel (I don't really have a "snood face"), but be fair about the jacket - please note that in the same pic dh is wearing a TIE... something must have been going on at the time.
In the previous year I'm in a robe and dh is in sweats....
Nice to see the claws coming out though... everybody's a critic.... I for sure expected cuzzin to use her quiche analogy (it's still welcome) on Brunhilda's request for "ungebroktizing" the last recipe, but apparently my attire is too distracting.....

Aaargh, no...
The broccoli quiche but you leave out the broccoli that calls for feta cheese, but you use cottage cheese and skip the crust!!! :P

My response wasn't meant to be critical at all. More like awe and amazement.

it's actually spinakopita, but with broccoli and cottage and no crust.
same idea as a bar mitzva I went to as a kid and I asked the waiter if the food was chicken chow mein (bar mitzva in the 70's, chinese was new cuisine) and he said yes, but there was no chicken in it. and I didn't see chow mein noodles, either. hence,
chicken-less
chow mein-less
you get the picture...

Who can tell the most differences between picture 1 and 2 ? I can spot a dozen.

Yes I mean the 2 family pictures.

OOOOH I love games like this!
Can I play too?
It's funny you should start this b/c I was thinking of mentioning one difference when I posted the pics but decided nobody cares...
A DOZEN?? really??
I'll wait to see what everybody else comes up with.
I personally think what is funnier is what HASN'T changed in the pic since Jen was little!!

ROTFL!
At first glance, I thought #1 said "difficult people" :D
Additionally, the kitchen fixture is actually new since the first pic was taken.
Nobody mentioned "in utero" Kayla....

Family pics taken with a self timer?

Brunhilda -
I've become the master of the self timer [I've been eying the flexible gooseneck tripod at photojojo for a while now....] and my family long ago learned to just smile [real ones] because we'll just keep doing it until we get a good one ;)

adorable pictures of your girl there!

That reminds me of when I was younger and I used to help my mother paint egg onto the challah, and she took a picture of me sitting on the counter with the paintbrush and challah.

that's really nice how your whole family works on it together

Wow. I have never seen such consistently well taken self timed shots. In fact, most people don't even bother anymore since they just don't come out well.

Non-gebroks? This qualifies for sure!